September 13, 2012  •  Leave a Comment
It was a little warmer last night but there were just 5 macro moths of 5 species in the traps and no micro moths. There were no new species for the year.  There was one fresh looking Alfalfa Looper (Autographa californica). Autographa pseudogamma is quite similar to A. californica but a black dash that connects the subterminal and postmedian lines will separate these species.  I've highlighted the dash in the picture below. 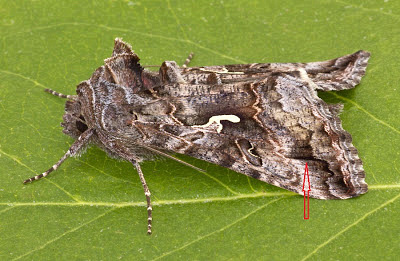